Success is no accident.
It is hard work, perseverance, learning, sacrifice and most of all, love of what you are doing or learning to do.

App developers are facing hard times the market is tough out there. According to comScore’s latest mobile app report, nearly two-thirds of smartphone owners in the U.S. download zero apps during a typical month. 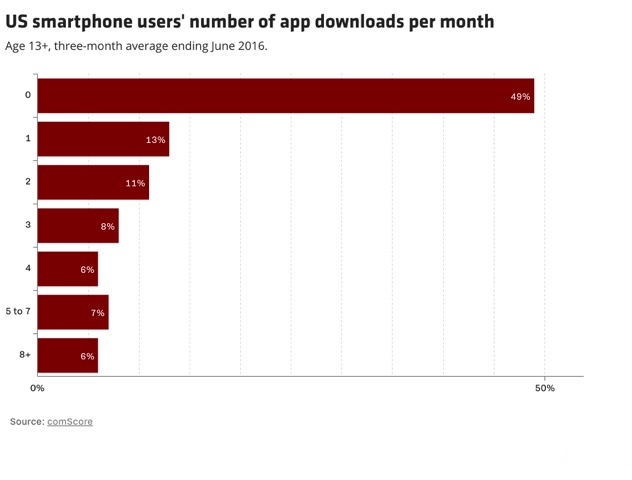 Of the 51% percent of those downloading apps during the course of a month, “the average number downloaded per person is 3.5,” comScore’s report says. “However, the total number of app downloads is highly concentrated at the top, with 13 percent of smartphone owners accounting for more than half of all download activity in a given month.”

So why is this happening? It’s not that apps aren’t useful— according to comScore, more than half of US smartphone owners use apps every single day. And it can’t be that apps are too expensive as most of them are free. So what’s happening?

One possible explanation is that people just don’t need that many apps, and the apps people already have are more than suitable for most functions. Almost all smartphone owners use apps, and a “staggering 42% of all app time spent on smartphones occurs on the individual’s single most used app,” comScore reports. New apps come and go, but perhaps breakthrough apps will be increasingly rare. A look at the top 25 most-used apps reflects mostly mature companies, including Facebook, Google, Pandora, and Yahoo.

Another likely reason is that it’s still not easy enough to find and download new apps. Discovering new apps can be a problem for the average user too: very few new app releases make mainstream news, while the app stores are not so user-friendly to navigate around. Apple’s App Store has received criticism for its lousy discovery features, with users relying heavily on top-25 lists, a bad search engine, and few editorial features. This mostly helps the rich get richer, and makes it harder for clever new apps to get noticed. Apple is right to be proud of its app program—it has been one of the most important inventions in the history of software, and Google has done a decent job copying. But there is certainly room for improvement.

This website uses cookies to improve your experience while you navigate through the website. Out of these cookies, the cookies that are categorized as necessary are stored on your browser as they are essential for the working of basic functionalities of the website. We also use third-party cookies that help us analyze and understand how you use this website. These cookies will be stored in your browser only with your consent. You also have the option to opt-out of these cookies. But opting out of some of these cookies may have an effect on your browsing experience.
Necessary Always Enabled
Necessary cookies are absolutely essential for the website to function properly. This category only includes cookies that ensures basic functionalities and security features of the website. These cookies do not store any personal information.
Non-necessary
Any cookies that may not be particularly necessary for the website to function and is used specifically to collect user personal data via analytics, ads, other embedded contents are termed as non-necessary cookies. It is mandatory to procure user consent prior to running these cookies on your website.
SAVE & ACCEPT